I had some good discussions on Twitter today about USB ports in wall power outlets to charge devices such as the iPhone, iPad, and a whole bunch of other gadgets that are now charged over USB. I am aware of two actual wall outlets and some other choices as well.

The first that I uncovered is the Newer Technology Power2U AC/USB Wall Outlet sold by OWC. This unit looks nice and is symmetrical unlike the other option. As far as I can tell, it only comes in white.

I came across an article this morning mentioning that the Power2U does not suffer from the phantom power issue (basically that the charger is still converting 120V to 5V whenever it is plugged in and is therefore wasting electricity) because the USB ports are only active when a device is plugged in. This is controlled by two small doors that cover the USB ports. When the doors are closed, no power is consumed by the USB ports.

This seems like a good idea on the surface but a major issue comes up. What happens if you leave your cord plugged in? You would never do that, right? Of course, most of us do just that and leave our cords plugged into the USB port which means it is still pulling power. Our second option deals with this problem in a much better way.

The FastMac U-Socket is the original USB-charging-port-in-a-wall-socket solution. The U-Socket right out of the gates is a better product because of its more intelligent design. Rather than being passively controlled by a physical door, the U-Socket electronically senses if a device is plugged in and needs to be charged.

The U-Socket also has intelligence about charging two iPads at the same time. Whichever one is more dead will receive full charging power until it hits 25 percent battery and then charging power will be divided more equally between the iPads. In addition, the USB 3.0 ports together offer 2400 mA (vs the Power2U’s 2000 mA).

It’s interesting that the Power2U says it supports the iPad because the iPad’s charger is 2100 mA. I’m not sure if that causes an issue or not but it is potentially concerning.

Instead of just white, the U-Socket comes in standard and Décor versions in Light Almond, Standard Ivory, White, and a White or Décor White Tamper Resistant version. This is a much better option since you can actually match whatever you have in your house. The majority of houses that are just a few years old do not have white power outlets. On the FastMac website, there are even pictures of standard wood and Décor wood options although there is not a way to directly order those as far as I can tell.

I spent some time talking to FastMac and they were very helpful. So far I am impressed with the U-Socket much more than the Power2U. In addition, the U-Socket is available from Amazon.com which is a big plus for me since I purchase everything possible from Amazon with the convenience of my Prime Membership.

There are a few other ways to go if you want USB at your power outlet. Belkin makes a BV106050-CW 6-Outlet Surge Protector with USB that is essentially just like the boxes you plug into your outlet that give you five or six outlets from the two original outlets and are secured with a long screw in the center. It basically takes that concept and adds USB. 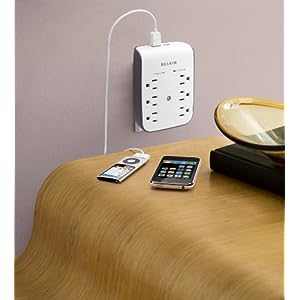 The device appears to look nice and so I ordered one this morning. (Update: I found out the Belkin only supplies 700 mA per port which barely charges one iPhone. I cancelled the order.) Some other similar devices exist but these are the ones I have looked at thus far. One way or another, I need more USB charging ports and I am not interested in using any more wall chargers. I have far too many of those.

Thanks to Marco Arment and Mitch Haile for getting the conversations started that led to finding these products.