In recent years I have gone through a number of different platforms to run the products I use and deliver for my clients. I have used Mac mini clusters, Amazon EC2, my own custom server farms, and a combination of the above. I am once again looking for a new platform.

This brings me to one simple fact. In my work, I prefer to have the maximum amount of control over the operating system as well as the hardware. I have found that over time I am better able to manage stability and functionality when I have been able to choose what components are part of the system in every way.

To that end, my preferred operating system is OpenBSD. There is no other operating system on the market that offers such fantastic security, excellent documentation, and minimal-but-practical approach to the base system.

Although I frequently use Linux distributions for specific tasks that require it, I always come back to OpenBSD on as many servers as possible. Although, as a rule, OpenBSD does not cater to virtualization, vmt(8) and vmwh being the exceptions, I have found excellent stability in virtualizing OpenBSD using multiple different virtualization software packages.

These have included VMware, both ESX and Fusion, as well as VirtualBox, and Xen using HVM. Each environment has its advantages and disadvantages but all have been very stable and worked quite well for me.

To that end, I am in the process of building out a new, next-generation virtualization platform that provides benefits in energy consumption, computing power, efficiency, and cost effectiveness. Although I have nothing against AMD, I tend to use Intel processors for all of my mainstream servers. Some of my prior and still active platforms run on ARM, PowerPC, and SPARC64 architectures.

Based on the currently available technology and performance levels, I have selected Intel’s Xeon E3 processors as the best option for my new platform. As we have seen from many major press announcements of late, the industry is moving away from concentrating a large amount of processing power in individual systems and into a lower performance per system but more systems (or processors) in the cluster. For purposes of redundancy, cost, and energy efficiency, it makes more sense to build more Xeon E3 systems rather than fewer Xeon E7 systems.

Looking at the E3 lineup, processors fall into several categories with some exceptions. The unusual processors are the E3 1220L and 1260L which are both low power models. The 1220L is only a dual-core chip with hyper-threading which looks on paper much like a very low power Core i3 processor. It features a measly 20 watt max TDP, a clock speed of 2.2 GHz, 3 MB of cache, but also features a max turbo frequency of 3.4 GHz. It features all of Intel’s processors technologies except for integrated graphics. The other low power model, the 1260L, features a 45 watt max TDP, a 2.4 GHz clock speed, 8 MB of cache, and a max turbo frequency of 3.3 GHz. The advantage of the 1260L is that it is a quad-core chip with hyperthreading and also has 8 MB of cache. Unlike the 1220L, the 1260L features integrated graphics.

The rest of the processors in the E3 lineup are very similar with slight increases in performance with each model. The E3 1220 is the other oddball in that it is a quad-core chip but lacks hyperthreading. The 1230 and up are all quad-core but also have hyperthreading. The 12x5 chips all have integrated graphics while the 12x0 chips do not. 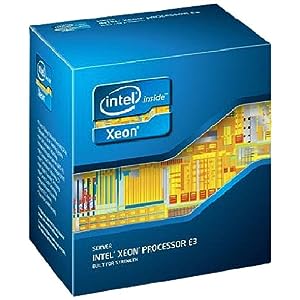 The final factor is availability. Because it is a newer chip, the E3 1260L is much more difficult to obtain. All of the normal channels I purchase parts through do not have it and I had to contact a company that specializes in building servers and works closely with SuperMicro in order to get a quote. Even then, the E3 1260L would have to be special-ordered and would take an addition 5-7 days to arrive.

There is one other factor that I have not mentioned. That factor is what your intended system supports. One of the cluster systems I will be deploying only supports a processor with a max TDP of 45 watts or less. That very quickly limits that system to the E3 1220L (20W), E3 1260L (45W), Core i3 2100T (35W), or Core i3 2120T (35W). This system that I am planning to use in some applications is the SuperMicro SYS-5017C-LF and it is a superb, compact, energy efficient system that makes a great cluster node. Given my evaluation of processor options, the E3 1260L would be my preferred choice although for the extremely budget strapped project, the Core i3 2100T will certainly be the most cost effective choice.

While the SYS-5017C-LF fits one major role in my new choice of systems, there is still the need for an additional mini tower form factor or more expandable rackmount system. Once again, I am sticking with the SuperMicro SYS-5017C series due to its amazing power and flexibility in a rackmount system.

I sold the E4700 CPU with the matching SuperMicro motherboard and memory on eBay and looked at the available motherboard options. The one that jumped out at me was the SuperMicro X9SCL+-F motherboard which fits the SuperMicro case’s Micro ATX form factor. There are several other flavors of X9SCL motherboards but the X9SCL+-F was the one I wanted for a special reason.

Intel’s Sandy Bridge Cougar Point chipset server platforms includes the new Intel 82579LM gigabit ethernet controller. Since this controller is very new, the majority of open source operating systems have only just added the required driver modifications which may not be in the current release. The other X9SCL variants all have one 82579LM controller and one Intel 82574L gigabit ethernet controller. I did not want to worry about this potential issue so I opted for the X9SCL+-F which has two Intel 82574L controllers.

I have been using this system since late summer and have been very pleased with its performance and design. Although I planned to go with the E3 1230 for this system, a particularly good deal on the E3 1220 came up and so I snapped up that processor. At the current prices, I think the E3 1240 is probably the best value before the very large price jumps to the E3 1270, 1280, and 1290 processors.

I am actually in the process of moving the system to a whole new virtualization system right now and will have updates on that process soon. Stay tuned.