As a follow-up to my previous post, Flashing IT Firmware to the LSI SAS9211-8i HBA, I have been looking at other options for HBAs. Sometimes it might be appropriate to have an HBA that supports both internal and external drives or you might need support for more than eight drives. These are some additoinal solutions that should be considered. 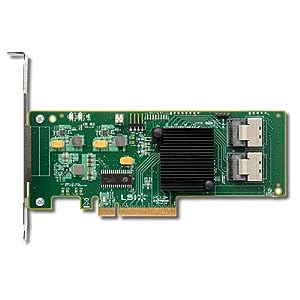 All of the controllers mentioned here have been selected based on the need for drives to be used in some sort of software RAID solution such as Linux with md RAID or FreeBSD with ZFS. While there are other more advanced controllers with advanced hardware RAID support, those features would go completely unused in the intended use. To that end, using the IT firmware is preferred and all of these controllers support IT firmware. As I covered in the previously mentioned post, the process of flashing to IT firmware is a little more complicated but is worth the trouble.

Unless otherwise noted, the controllers can support up to 256 devices if used with an SAS expander. This is a good option but increases costs and only really makes sense if you plan on having a very large number of drives in your system.

The original HBA I was writing about was the LSI SAS9211-8i which supports eight internal drives through the use of two SFF-8087 internal connectors. These require breakout cables to directly support Serial ATA drives. The 3ware Multi-lane Internal SFF-8087 to four SATA cable seems to be the best value for the breakout cable. In the case of the SAS9211-8i, you would need two of these cables. I have been extremely happy with this card in my storage server (write-up coming soon) and its performance has been exceptional. Note that this controller is a PCI Express 2.0 x8 card so make sure you have an appropriate PCI Express slot.

As I covered in another post, High-End Mini-ITX NAS Server with ECC, another choice would be the LSI SAS9211-4i which is identical to the SAS9211-8i except that it only has a single SFF-8087 port and therefore supports only four Serial ATA hard drives. The same 3ware cable is needed but only one this time. This controller is a PCI Express 2.0 x4 card which is more common on many motherboards.

In the case that four or eight drives is not enough, another option is the LSI SAS9201-16i which is a similar controller to the other two but supports sixteen drives via four SFF-8087 ports which require four of the 3ware cables. I am considering this controller for my storage server since I already have eight drives installed and am thinking about adding at least three more drives. Like the SAS9211-8i, this card also uses a PCI Express 2.0 x8 slot but can support up to 512 devices using an SAS expander.

Another interesting option pointed out by John in the comments on a previous post is the LSI SAS9212-4i4e controller. This is a more unusual controller since it features four internal Serial ATA ports (not an SFF-8087 port) and one external SFF-8088 port to connect to an external enclosure or SAS expander. It can support up to 256 devices with an SAS expander like the 4i and 8i models. It also features a PCI Express 2.0 x8 interface.

The LSI9212-4i4e is available for $251.99 from Amazon but, in this case, there is an even better bonus. There is an identical but IBM-branded version of this card also available and it is $198.27 from Amazon (thanks to John for pointing this one out too). Saving a little over $50 is definitely worth it since the card is identical in every way. This is not an unusual situation and happens frequently especially with IBM and Intel selling their own versions of LSI cards.

There are, of course, other options out there. I particularly like LSI controllers due to their optional IT firmware rather than being stuck with IR firmware. Generally speaking a NAS design is all contained in one computer which makes an internal controller preferable. There are other excellent LSI controllers that are designed to only use external enclosures using SFF-8088 ports. These include the LSI SAS9201-16e, a PCIe x8 card with four SFF-8088 ports for sixteen external drives without SAS expanders and 512 devices with SAS expanders. Another option is the LSI SAS9205-8e, a PCIe x8 card with two external SFF-8088 ports for eight external drives unless used with an SAS expander where it can support an amazing 1024 devices.

There are a few other controllers but these HBAs cover the best options for nearly all situations where hardware RAID is not a priority. Some of those mentioned also support RAID 0, 1, 1E, or 10 but with the IR firmware. If you are planning to use hardware RAID, it is probably better to look at other options that include on-card battery backup and additional cache memory.

Of the cards mentioned, the most intriguing to me is the IBM-branded version of the LSI SAS9212-4i4e. I am considering adding this card to my storage server since it would provide the additional four internal ports I need while also providing an external SFF-8088 port for an enclosure. I have not made a firm decision yet.

Since I already have the SAS9211-8i, I might either replace it with a SAS9201-16i, add an SAS9211-8i, or add the IBM-branded SAS9212-4i4e. The other temporary alternative is to use some of the five currently-unused Serial ATA 3Gb/s ports on the motherboard. These are slower (higher-end PCIe controllers seem to be faster than motherboard ports) but might do the job for now.