In line with Intel’s tick tock roadmap of processor introductions, Ivy Bridge processors are officially available on April 29 as the tick. Earlier this month, the first motherboards featuring the new Z77, H77, and B75 chipsets started emerging. Although I don’t have an Ivy Bridge processor at this time, these new boards work perfectly with Sandy Bridge processors. This is a rundown of the some of the best boards so far.

Ivy Bridge introduces another group of chipsets. These are the B75, Q75, Q77, H77, Z75, and Z77 chipsets. Currently the majority of the boards available are using either the B75, H77, or Z77 chipset. Essentially, if you are a power user who might do some overclocking, wants the maximum available PCIe slots in the main PCIe configuration, or might want two or more graphics cards, the Z77 chipset is going to be your choice. The H77 has no CPU or RAM overclocking abilities and only supports a single PCIe 3.0 x16 slot for a graphics card. 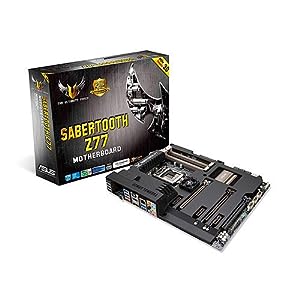 Personally, I would only choose a Z77 or H77 board at this time. For the past two weeks or so I have been using one of the early Z77 boards, the Asus Sabertooth Z77 board. I picked that board for a variety of reasons but one of the most important was Intel Gigabit Ethernet. I have used a few different boards recently with Realtek RTL8111E Ethernet and have been less than impressed with its performance. In contract, I have used Intel Gigabit Ethernet controllers for many years with no problems at all. In fact, all of the boards I will be covering in this article series use Intel Gigabit Ethernet. For me, it is a critical feature and I think your experience will be better if you go that route. Before I get into all the details on the Sabertooth Z77 board, let’s cover what has changed in Ivy Bridge chipsets from their Sandy Bridge siblings.

There are some low level changes for the PCI Express bus but the most important is the addition of PCI Express 3.0. The only slots typically PCIe 3.0 capable are the PCIe x16 slots intended for graphics cards. PCIe 3.0 effectively doubles the bandwidth from PCIe 2.0 (technically the bandwidth is not doubled but because the overhead is dropped from 20 percent to about 1.5 percent, it effectively is). Although this change is nice, nothing is available to really take advantage of the extra bandwidth available at this time.

At the chipset level, the most noticeable change that will impact the greatest number of people is the addition of native USB 3.0. Prior to the introduction of Ivy Bridge chipsets, USB 3.0 had to be added with a third party controller. Initially this was an NEC/Renesas on most boards but later boards often used an ASMedia USB 3.0 controller. This is most likely the reason that no Sandy Bridge Macs have USB 3.0. Apple typically implements a technology across all of its products of the same generation. There would not be any extra room in a machine like the MacBook Air to add a third party controller. It is anticipated that Apple will likely support USB 3.0 on new Ivy Bridge Macs most likely due in the next few months.

Features of the Asus Sabertooth Z77

Like I mentioned earlier, it was absolutely essential that any board have Intel Gigabit Ethernet. In this case, the Sabertooth Z77 has an Intel 82579V controller.

Since I’m planning to use two graphics cards, I wanted a board that would easily support multiple graphics cards. In this case, the Asus Sabertooth Z77 provides two PCIe 3.0/2.0 x16 slots that run at x16 for one slot or dual x8. In addition, the board has another PCIe x16 physical but running at x4 speed slot. The PCIe capabilities are rounded out by three PCIe x1 slots.

Something else that appealed to me about the Sabertooth Z77 is the PCIe slot layout. It seems like most of the time these days, the PCIe slots are arranged so that you are always covering a potentially useful slot whenever you use a dual-slot graphics card which is the norm these days.

In similar fashion to most Sandy Bridge chipsets, the Z77 continues to support two Serial ATA 6Gb/s ports and four Serial ATA 3Gb/s ports. These ports are all available along the edge of the board. While hotplug is available as a setting in the BIOS, my experience has been that it is better to use a separate controller for hotplugging SATA devices. The Sabertooth Z77 has this covered too.

Although audio has never been a significant issue for me since I often use a USB audio interface, it is nice to have a good codec on-board. The Sabertooth Z77 has Realtek ALC892 HD audio built-in that works very, very well.

In case you might be planning to use Sandy Bridge HD 2000 or HD 3000 Graphics or the upcoming Ivy Bridge HD 2500 or HD 4000 Graphics, the Sabertooth Z77 provides both a DisplayPort output and an HDMI output. These outputs work very well with my Intel Core i7 2700K processor’s HD 3000 Graphics.

As you may have noticed from the images, the Sabertooth Z77 has Thermal Armor that covers much of the board. This is part of the TUF (The Ultimate Force) feature-set that has been featured in the line of Sabertooth boards for a few years now. Part of this feature-set are two included fans that circulate air underneath the Thermal Armor. In addition, the slot covers provide dust protection. All of this is topped off by a five year warranty.

If you plan to move to Ivy Bridge or need to upgrade your board, the Asus Sabertooth Z77 is an exceptional board. This is my first time using one of the Sabertooth boards and I am quite impressed. It works equally well with a Sandy Bridge processor and provides a few new features of the Z77 chipset such as native USB 3.0. So far, I haven’t had a board with a better layout and feature-set. The Asus Sabertooth Z77 is available for less than $240 from Amazon.com.

If you’re interested in more new Z77 boards, I will be taking delivery of the Gigabyte G1.Sniper M3 Micro-ATX board tomorrow and will have some thoughts on it and some other excellent Z77 boards in a few days.