Back on February 24, 2011, Apple shook up its MacBook Pro lineup by adding an amazing new interface that had been rumored for some time. This interface had been known as Light Peak during its development but was announced as Thunderbolt. This interface promised to deliver incredible new solutions for expandability in a portable computer. Has it delivered?

As with any new technology, it takes time to be adopted. First Thunderbolt had to be available in some computers. The first was the MacBook Pro and then it hit the iMac, MacBook Air, and Mac mini. The first Thunderbolt storage devices were the Promise Pegasus R4 and R6 drive arrays. These arrays offer either four drives (R4) or six drives (R6).

LaCie was next with the announcement of the Little Big Disk Thunderbolt dual 2.5-inch SATA hard drive units. Delivery was far behind the Promise Pegasus units but are at last available. If you do a search today at the online Apple Store for Thunderbolt storage, only the Promise Pegasus units in various configuration and the LaCie Little Big Disk Thunderbolts units in various sizes show up as storage options. The third device that does appear is the [Promise SANLink Thunderbolt to 4Gb/s Fibre Channel Adapter[(http://bry.vc/zKtDUe) which is only useful if you have a Fibre Channel SAN to connect to.

Fast forward to 2012. As some have predicted, Thunderbolt never really hit critical mass in 2011 and it is only now in 2012 that we should start seeing more devices. LaCie is just now shipping an SSD version of their LaCie Little Big Disk Thunderbolt which will appeal to some that want the best performance although initial performance reports have been mixed. I am most definitely looking forward to additional devices.

Personally, I want to see an external drive enclosure from someone like OWC or Sans Digital that is powered and accessed through Thunderbolt. This would mean a 2.5-inch enclosure which would support a hard drive or an SSD.

I would also like something like Sans Digital’s MS1CT but with Thunderbolt. The trays for the MobileSTOR series can be purchased separately which allows easy swapping of drives. I would gladly pay $300 or more for such an enclosure if I only had to buy one or two and could buy trays for additional drives I would need on the road.

Since Thunderbolt combines both PCI Express and DisplayPort into a single cable, displays are another key feature of the future of Thunderbolt. Apple’s Thunderbolt Display is the first on the market and an excellent display. 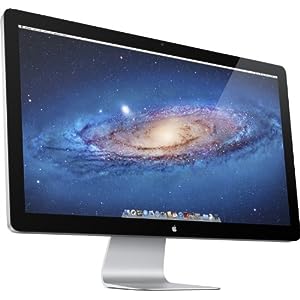 What makes the Thunderbolt Display special is the hub that it provides through Thunderbolt. Ports on the back of the display include three USB 2.0 ports, a FireWire 800 port, a Thunderbolt port, and a Gigabit Ethernet port. This really shows the potential of Thunderbolt for users of portable computers such as the MacBook Air which lack most externally connectivity options.

The unanswered question is if a company will come out with a Thunderbolt hub of some sort that supports two external displays using Mini DisplayPort so the field can be opened up to more displays. This would be especially useful for those that do not like the glossy display surfaces like the Apple Thunderbolt Display features.

One potential solution would be the Village Instruments ViDock 4 Plus although performance will not be fantastic since it is limited to PCI Express x4 at the fastest due to inherent limitations with Thunderbolt. Real world benchmarks should help answer some of these questions once solutions like these are generally available.

In a similar vein to the ports on the back of the Apple Thunderbolt Display, Belkin showed off its upcoming Belkin Thunderbolt Express Dock at the Intel Developer Forum back in September 2011. Although this is the first of its kind to be announced, I am sure we will see more hubs that allow expanded connectivity for Thunderbolt-enabled computers.

Update 01/09/2012: Belkin just announced this morning that its Thunderbolt Express Dock will be available for $299 in September 2012. That seems a little slow to me but I guess it is better late than never.

Sonnet Technologies is now shipping their Echo ExpressCard/34 to Thunderbolt Adapter which seems promising but we are still waiting on thorough reviews. Rob Art Morgan of BareFeats responded to my inquiry that the adapter has only shown 60MB/s write speeds in initial testing by OWC. Hopefully this will be addressed in time.

@brycv Yes. Sonnet Echo Express results will be posted when I get an eval unit. OWC lab measured a measly 60MB/s write speed.

At CES 2012, which is going on right now, LaCie has also announced an adapter that connects via Thunderbolt and provides two eSATA ports. Strangely, the adapter is in the exact form factor of the LaCie Little Big Disk Thunderbolt but without any drives.

Another great place for Thunderbolt to shine is in the multimedia and video capture/output market. One of the first to market is the BlackMagic Design UltraStudio 3D with Thunderbolt. This is just one example of this very exciting space. We will see more of these devices in 2012.

Thunderbolt is an incredible technology with amazing capabilities. If Intel plays things right with Ivy Bridge and future Thunderbolt controllers, Thunderbolt could end up being a very well entrenched technology in many computers, not just Apple systems.

We are all waiting for a revised Mac Pro that also includes Thunderbolt but I think the future of Thunderbolt will be championed by mobile and compact form factor systems. Laptops do not have the luxury of PCI Express slots and space is at a premium. A desktop, unless in a compact form factor, does not typically suffer from these same limitations.

Support on the desktop will help support the success of the Thunderbolt standard and will allow a mobile drive or array to easily be moved from a mobile system to a desktop system. This is an essential feature for many media professionals.

Time will tell but I expect 2012 to be very exciting for the Thunderbolt standard. I am looking forward to buying some of these great new peripherals this year.