As I have covered before, one of the major needs with the iPad if you want to use it for content creation, is an external keyboard. There are a few different options but one sticks out as my favorite. 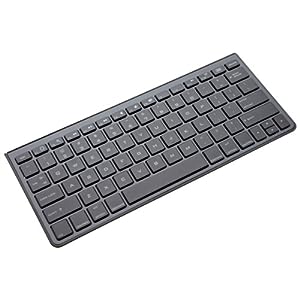 I very much enjoy using the Apple Wireless Keyboard and I use it every single day with my desktop workstation. However, there are a few limitations to the Apple Wireless Keyboard that I covered in a previous post. The two biggest limitations are its weight and the inability to turn the keyboard off with a switch. There is a button on the end of the “battery tube” but it is easily turned back on. There have been rumors that none of Apple’s recent products have an off switch because of a line of thinking from Steve Jobs. I have no idea if that is actually true but it does appear that Apple products do not have an off switch.

When the AmazonBasics keyboard arrived, I first noticed that it shipped in a small box just barely larger than the keyboard. The shipping label was placed directly on the box. That was a nice touch and made for no wasted packing materials. The next major thing I noticed was that the keyboard is amazingly light. To my surprise, it also includes two AAA batteries in the box. In an age where almost everything needs batteries and they never come with the product, this was a welcome surprise.

As soon as you start typing on the AmazonBasics keyboard, you notice that it is just slightly smaller than the Apple keyboard. It does not seem to cause any problems with accuracy, at least for me, but it is just slightly smaller. Some users with particularly large hands might be negatively affected by the slight decrease in size but most users will find it to be just fine. All the standard Mac or iOS keys are there and the keyboard just seems to work great. I am actually writing this post from the keyboard in iA Writer. The only slightly odd key placement that I have noticed is the arrow keys. The left and right are normal sized at the bottom right of the keyboard but the up and down arrow keys are half size and right on top of each other in the space of one standard key. Slightly unusual but much better than the alternate layout where the keys are all full size and in a straight line (left arrow, up arrow, down arrow, right arrow or similar all in a horizontal row).

I really enjoy using the keyboard. The key action itself, while possibly ever so slightly louder than the Apple keyboards, has a great tactile feel to it without being too hard.

The front of the keyboard looks very similar to the Apple Wireless Keyboard but is black instead of white. I think this is a better fit with a black iPad. I might feel differently if I had a white iPad. The AmazonBasics Bluetooth Keyboard for iPad seems to fluctuate in price slightly as many Amazon items do but the price is currently about $43. This is a very good deal for this accessory. The Apple Wireless Keyboard, although a more premium product, is about $69. The materials are not quite as nice as the Apple product but the welcome reduction in weight in the AmazonBasic keyboard is a worthwhile gain.

The AmazonBasic Bluetooth Keyboard for iPad has already turned into an essential accessory for my iPad. Today I was communicating with several people using Twitter and Jabber instant messaging and it was an invaluable tool. Without it, it would have taken much longer to type the various messages.

However, the real test is time. Although I wrote most of this article shortly after I received the keyboard, I have now been using it for about a month and I can still say it is extremely useful and an absolute pleasure to use.

The AmazonBasics Bluetooth Keyboard for iPad is available from Amazon.com for less than $44. There is also another accessory that I will be reviewing shortly that is a perfect complement to this keyboard and an iPad.