When you live in a world of only one monitor, monitor calibration is rarely thought of unless you are doing color critical work such a digital photography or graphic design. When you move from a single monitor to multiple monitors, calibration becomes essential. I finally purchased an inexpensive monitor calibration device. I should have done this years ago.

I have read about the high end monitor calibration devices because of my dabbling with high end digital photography but I never considered it a very important purchase. I had been using multiple monitors but rarely more than two at a time. For a few years now I have owned two sets of two identical monitors. The two monitors within each set matched nicely and I did not have a reason to look at calibration any further.

Earlier this year, primarily because of the increasingly complex nature of my work, I decided it was time to go one step further. I have had an excellent Samsung 2233SW 21.5-inch LCD monitor for a few years. I particularly like it because, while still 1920x1080 (referred to as 1080p) resolution, it is smaller than 23-inch monitors which means a little higher pixel density. This works well for me.

Thinking it would be nice to have a set of Samsung 2233SW monitors, I looked around on eBay and ended up purchasing two more of them. When they arrived I had a few surprises. The 2233SW I had owned for a few years stated 15000:1 Dynamic Contrast. Both of the 2233SW’s from eBay stated 50000:1 Dynamic Contrast. Also, the on screen menu system on both eBay 2233SW’s was much newer than the menus on my original 2233SW. These two things did not seem that significant until I tried to match the three displays.

My original 2233SW has much warmer colors than either of the eBay 2233SW’s and I could not seem to adjust the displays to match through their menu settings. I also used the basic calibration function in OS X’s Displays preference pane but that did not help enough to solve the problem. After a few conversations and some thought, I realized that this was exactly why monitor calibration was so important.

Last week I decided it was finally time to get a monitor calibration unit but, since I am not currently doing color critical work, I did not want to spend lots of money on a fancy device I would only briefly utilize. The good devices I had previously been aware of were many hundreds of dollars. I did a quick search on Amazon and found what looked like a reasonably priced device. I read the reviews and I was still impressed. 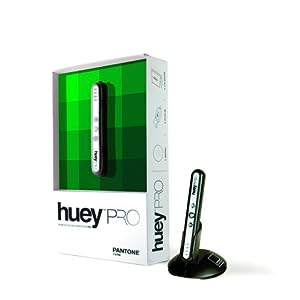 The device that caught my attention was the Pantone huey Pro. Pantone is synonymous with color correction and the color critical work due to their color palette work. The best part about the whole thing is that the huey Pro only costs $69. I was pleasantly surprised. I quickly ordered one but it did not arrive until today due to the holiday weekend.

Rather than install the software on the included CD, I went straight to the Pantone web site’s software downloads section and downloaded the latest version 1.5.1 of the hueyPRO software. I opened the hueyPRO application and it asked me to plug in the huey Pro device itself. The easy assistant walked me through the process of sticking the huey Pro over the center of the screen with its built-in suction cup feet and then it continued through the color evaluation process with the three sensors built into the huey Pro.

I did find that the best way to start is to use the reset function of the 2233SW’s on screen menus to return all the color, brightness, and contrast settings back to their factory defaults. Before I did this, brightness was not quite matched between the three displays.

After this three minute process was completed for each monitor I now have a ColorSync profile for each monitor that finally allows them to match. No more cold blue on the sides and warm in the center. I am really impressed with the huey Pro. If you have multiple monitors and need to calibrate, this is a great way to do it. It works with OS X, Windows, and I have read that it is compatible with some Linux color correction software as well.

It is a great buy that I highly recommend for anyone with multiple monitors. The Pantone huey Pro is available for $69 from Amazon.com.