The Mini-ITX form factor has been with us since 2001 and is a very interesting form factor if you are planning to build your own HTPC or have any need for a compact computers. Systems such as Apple’s Mac mini are close relatives of this form factor. Although I would seriously recommend looking into a Mac mini if you need a real HTPC, building your own compact system is a great project.

I have been thinking about building a compact system for a little while now. One of the requirements of this project was to use a Gigabyte motherboard that was easy compatible with a particular operating system. The two possible boards were the GA-H67N-USB3 or the GA-H61N-USB3. Although the H67N board was my first choice, it appears to be either discontinued or experiencing supply chain issues. That really leaves the GA-H61N-USB3 as the only compatible Mini-ITX motherboard that is readily available. I ordered the H61N board and it arrived right after Christmas.

The next step in building a Mini-ITX system is selecting the case. There are quite a variety of Mini-ITX cases on the market now. Some are extremely compact while others are slightly more spacious. I looked at two moderately cases because I wanted to make sure that I could fit a 3.5-inch hard drive in the case. While it is possible to get several different 1TB 2.5-inch drives, there is a definite performance penalty for those drives since they are the slower 5400 RPM 2.5-inch variety. Faster 7200 RPM 2.5-inch drives top out at 750GB for now.

The H61N motherboard is a little less expandable that its sibling, the H67N. It only has two 3Gb/s SATA II ports on the motherboard for internal drives and one 3Gb/s eSATA port for an external drive. If you intend to use a DVD drive that leaves only a single hard drive in the case. Otherwise, you could have two hard drives. I will most likely only have a single hard drive in this case. I may add a DVD drive at some point but I am undecided for now.

In looking at the available cases on the market, two were initially of interest to me. The first was the Cooler Master Elite 100. I ordered it from Amazon.com and it arrived in mid December. 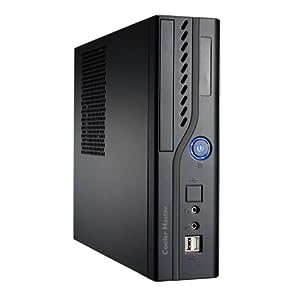 While I like the way the case looks in the photos, the fact that it can mount on a monitor using the VESA mount, and can house one 3.5-inch and two 2.5-inch drives, I was disappointed with how difficult it was to open the case and install the needed components. The case also did not have the quality feeling I was hoping for. Because of these issues, I quickly realized that I was never going to be happy with the case and I decided to send it back.

In the case’s favor is its additional compatibility with Micro ATX motherboards but the motherboard I had on hand would have been an extremely tight fit and using a Micro ATX board also removed the ability to install a 3.5-inch hard drive in the case. The case does include a 150 watt power supply which Cooler Master states allows you to use a maximum of a 65 watt TDP processor. I think my intended use might be a pushing the power supply farther than it should be pushed.

My next choice for a Mini-ITX case was the Apex MI-008 which includes a 250 watt power supply. The Apex case is a little more spacious and more cube-like than the Elite 100. I ordered this case after my disappointment with the Cooler Master Elite 100. It arrived right after Christmas. 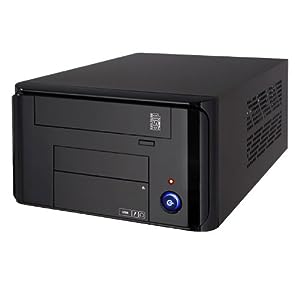 Much to my surprise, once again, I was disappointed with the case. Since my experience with the Elite 100, I had decided that I might keep an NVIDIA GeForce GT210 graphics card in the case in order to provide improved graphics performance over the Intel HD 3000 Graphics built into either the Intel Core i3 2105 or Core i5 2405S processor I was planning to use.

The Apex case, although providing space for one PCI Express card, did not have enough space for the width of the GeForce GT210 card. I was also disappointed at how the 3.5-inch hard drive basically pushed up against the CPU cooler and the overall construction was missing the quality I was hoping for.

After two disappointing cases, I have decided to look at another case that might be a better fit and have much better construction. This time, I am choosing a case from Silverstone, a well known manufacturer of HTPC and other higher end case designs.

There are two primary purposes for this system. The first is to be a media center storage system for our iTunes content. The second purpose is for our son to play a few games such as Minecraft on the system. The case I am going to order this week is the Silverstone SG05BB-450 which includes an SFX format 450 watt power supply. 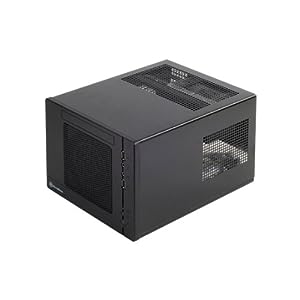 This case is expressly designed to house a graphics card as well as one 3.5-inch drive, one 2.5-inch drive, and a slim optical drive. Although more expensive than the other two cases I initially purchased, the Silverstone SG05BB-450 looks like a much better system all around. 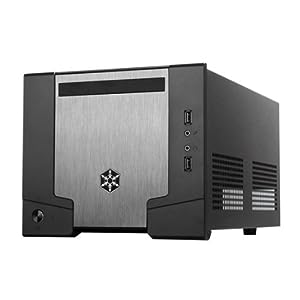 This whole process of selecting a Mini-ITX case has reminded me once again that in most things, you really do get what you pay for. An inexpensive case is made with cheap components and is missing the attention to detail and quality that a higher-end case provides. Later this week I will also be building a Micro ATX system with another Silverstone case that should be delivered mid-week. I will have a post detailing that process soon.